The RAAF Museum is one of the top ten places to visit in Melbourne in my opinion. 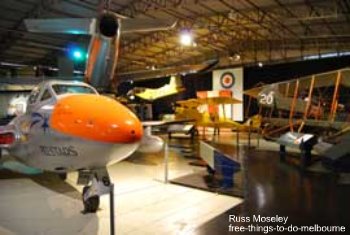 It's very big and of a high quality but looks rather under-visited from my experience.........

RAAF Williams (where the RAAF Museum is located) has seen plenty of action....... 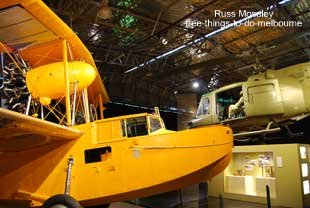 The museum really brings the airfield to life.

It starts from the very beginning when the airfield was just a sheep paddock.

You'll find good quality information and displays on all of Australia's wars and conflicts.......

......right up to the present day where they help with bushfires and rescues.

In fact RAAF Williams is apparently the oldest active military base in the world.

There are loads of old aircraft to see too.

The icing on the cake is the flying displays.......

........I'm told they sometimes even have aerobatic displays.

I saw a Winjeel on my visit which was a 1950's training aircraft.

(You can see from the photo of the plane taking off that the museum isn't too far away from Melbourne city centre by the way).

Other aircraft regularly used for the flying displays are a Tiger Moth and a Sopwith Pup replica. I can't wait to see them in action. Visiting aircraft are also flown sometimes.

The displays include a 15 minute talk about the aircraft and a question and answer session at the end.

You can also arrange a guided tour of the museum. I didn't find out about this until near the end of my visit.....

It's a 25 minute drive south-west from Melbourne along the Princes Freeway.

Take the Point Cook Road exit off the freeway. There are signs all the way from the freeway except at the end of the freeway turn-off! Turn right here from the left lane!! Then it's an immediate left turn and follow the signs.........

Everyone over 16 must bring along photo ID as the museum is located within an active military base.

You'll need to get out the car at the RAAF base to sign in and show your photo ID. They'll then direct you 700 metres to the museum further down the road.

It's open Tue-Fri 10am-3pm and weekends/public holidays from 10am-5pm. Donations are accepted.