The ANZ Bank at 380 Collins Street, Melbourne (or the Gothic Bank as it's also known), must be one of the best places to visit in Australia (along with 333 Collins Street ).

I'd read that this was one of the more interesting places to visit.......

.......From the outside it looks reasonably interesting but nothing special. However, the inside is absolutely amazing..... 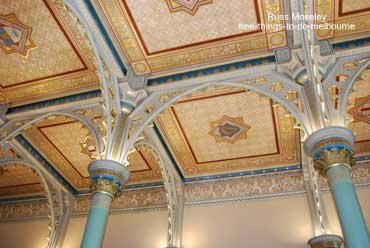 There are two main rooms to see, the main Banking Hall (which is still in use as a banking hall) and The Cathedral (nearer the back on the right).


The Banking Hall has massive columns holding up the hand painted gold-leaf decorated ceilings, there are shields bearing coats of arms and ornate wooden structures. 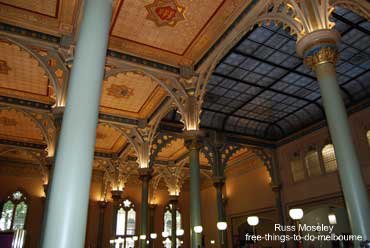 The Cathedral Room contains columns that took 30 horses to pull each of them, arches, french marble dado, intricate cornicing, a stained glass window of a miner panning for gold (the foundation of the bank's wealth) and mosaic patterned floor tiles. 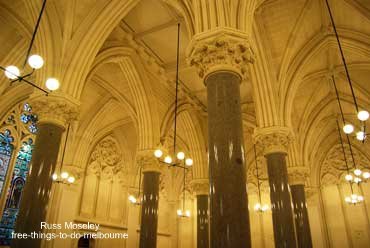 My photo of the Cathedral has made it yellow but it's really very white!! You'll also find the Banking Hall a bit more colourful than my photos show it to be! They still look worth making a trip to see though, don't they?!


These rooms show the extent of the money that was around in Melbourne following the gold rush.

They were constructed by the English, Scottish and Australian Bank, a forerunner to the ANZ. 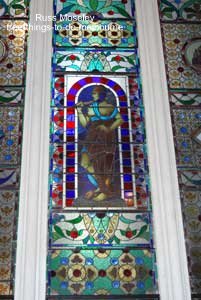 There are some signboards up giving details about the building so you can do a self-guided tour.

The building's located at 380 Collins Street, Melbourne and it's open from 9.30am - 4pm weekdays.

While you're here, have a wander round the free museum too. It's located in the basement. It has a separate entrance in the middle of the building going down some steps from Collins Street. The museum's open 10am - 3pm weekdays.